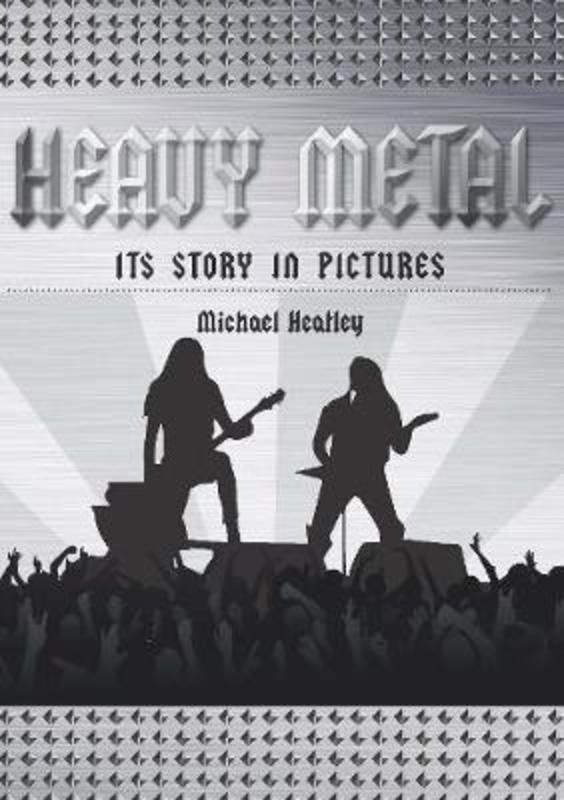 The Story in Pictures

Heavy Metal: The Story in Pictures is a colorful guide to this complex but enormously popular subject, including a look at festivals, fans, and the heavy metal lifestyle. Over 350 photographs feature heavy metal's cutting-edge bands on stage-with some candid behind-the-scenes shots, too. Each chapter starts with a detailed chronological timeline of major events-band formations and fold-ups; seminal album releases; important tours and gigs-followed by a photographic coverage of the decade.

Heavy metal developed in the late 1960s and early 1970s in the United Kingdom and the United States. With roots in blues, progressive, and psychedelic rock, heavy metal developed a thick, massive sound, characterized by highly amplified distortion, extended guitar solos, emphatic beats, and overall loudness. It did not take long before the first heavy metal bands-the blues-based Led Zeppelin, Black Sabbath, and Deep Purple being the leaders-attracted large audiences and significant album sales. Often critically and publicly reviled-something that is true to this day-few of these hard rock pioneers would continue on into the heavy metal genre.

By the mid-1970s, Judas Priest helped spur the genre's evolution by discarding much of its blues influence. Motoerhead introduced a punk-rock sensibility and an increasing emphasis on speed. Bands such as Iron Maiden, Def Leppard, and Saxon followed in a similar vein. Before the end of the 1970s, heavy metal had attracted a huge following of headbanging fans. Behind the music ran a vein of anti-authoritarianism and-more insinuated than real-Satanism and black magic that really got the pundits talking, as did the aggression and violence implied by so many band names and song titles.

Heavy Metal: The Story in Pictures looks carefully at the ancient history-the 1960s through to the start of the 1980s-but the bulk of the book concentrates on the last 30 years that saw the splintering of the genre into a myriad forms: from the great thrash metal bands-Exodus, Metallica, Anthrax, Megadeath, Slayer and then Kreator, Sodom, and Destruction, and Brazil's Sepultura-to metalcore, that combines various elements of extreme metal and hardcore punk, by way of death metal, black metal, power metal, doom metal, gothic metal, glam metal, alternative metal, nu metal, folk metal, Viking metal, drone metal, sludge metal, extreme metal, and even retro-metal.

From Donington to Ozzfest, Hard Rock Hell to Sonisphere, festival-going has become a rite of passage in the metal world. With Heavy Metal: The Story in Pictures, get an up-close look at Hellfest, FortaRock, Zwergenaufstand Open Air, Eisenwahn, Wacken, and Jalometalli and take a stunning visual tour through the evolution of heavy metal.