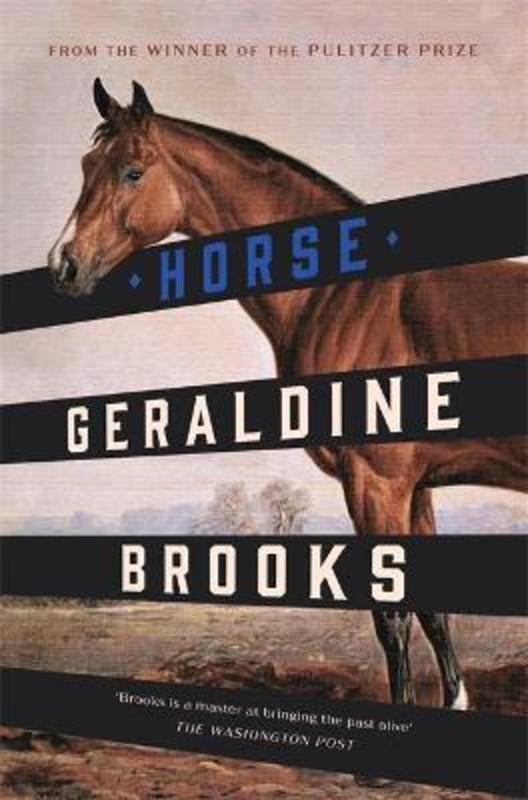 'He tilted his desk lamp so that the light fell on the image. The head of a bright bay colt gazed out of the canvas, the expression in the eyes unusual and haunting.'

A discarded painting in a roadside clean-up, forgotten bones in a research archive, and Lexington, the greatest racehorse in US history. From these strands of fact, Geraldine Brooks weaves a sweeping story of spirit, obsession and injustice across American history.

Kentucky, 1850. An enslaved groom named Jarret and a bay foal forge a bond of understanding that will carry the horse to record-setting victories across the South, even as the nation reels towards war. An itinerant young artist who makes his name from paintings of the horse takes up arms for the Union and reconnects with the stallion and his groom on a perilous night far from the glamour of any racetrack.

Washington, DC, 2019. Jess, a Smithsonian scientist from Australia, and Theo, a Nigerian-American art historian, find themselves unexpectedly connected through their shared interest in the horse - one studying the stallion's bones for clues to his power and endurance, the other uncovering the lost history of the unsung Black horsemen who were critical to his racing success.

With the moral complexity of March and a multi-stranded narrative reminiscent of People of the Book, this enthralling novel is a gripping reckoning with the legacy of enslavement and racism in America. Horse is the latest masterpiece from a writer with a prodigious talent for bringing the past to life.

'What Brooks does ... is set her reader on a great search by opening up a compelling vista of humanity and leaving you hankering after more' Australian Book Review

'Powerful storytelling, its landscape and time evoked in lyrical prose ... a compelling read, contemporary in its relevance' The Guardian Australia

'There's something bordering on the supernatural about Geraldine Brooks. She seems able to transport herself back to earlier time periods, to time travel' The Boston Globe

'A master at bringing the past alive ... in her skilful hands the issues of the past echo our own deepest concerns' The Washington Post

'Brooks is as adventurous a novelist as she was once a journalist ... her journalistic sense of story has remained vibrant' The New York Times