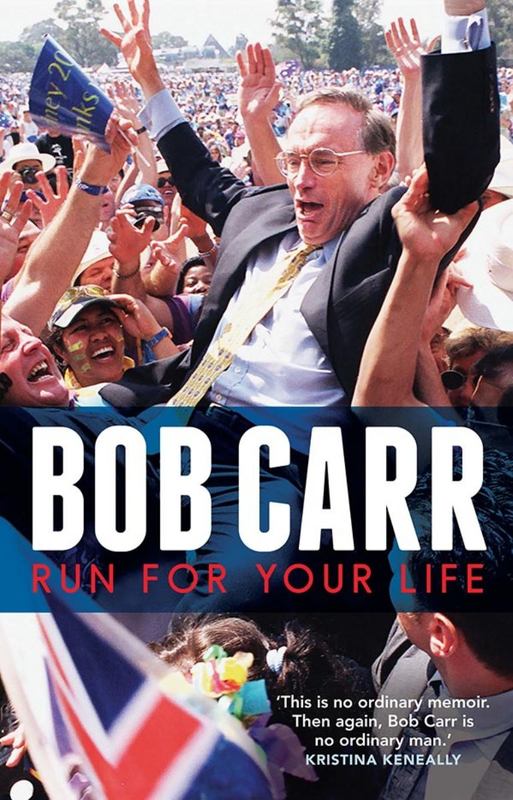 Run for Your Life

Most political memoirs are boring.

Bob Carr tears up the rules. He plunges in, beginning with the despair of a young man pining for a political career, convinced he's going nowhere, then vaulting to the exhilaration of a premier who, on one day, saves a vast forest and unveils the country's best curriculum.

He lashes himself for ignoring a cry from a prisoner in a cell and for a breach of protocol with a US Supreme Court judge. He considers talking to the leader of a notorious rape gang and celebrates winning power against the odds- a leader without kids or any interest in sport.

He describes growing up in a fibro house without sewerage and a 'lousy education' that produced a lifetime appetite for self-learning. He is candid about dealing with the media, dining with royals, working for Kerry Packer.

He reveals the secrets he learnt from Neville Wran. He is open about his adulation of Gough Whitlam. Floating above all is Bob Carr's idea of public service in a party, he says, that resembles an old, scarred, barnacled whale.

In an era of bland politicians, here's one with personality true to his quirky self.

Silence the jet skis! Balance the budget! Liberate the dolphins! Roll out the toll roads! Declare a million hectares of eucalypt wilderness!
Be a politician of character.

All author proceeds from this book are donated to help the children displaced by the Syrian civil war by funding humanitarian aid through the registered charity Australia for UNHCR.