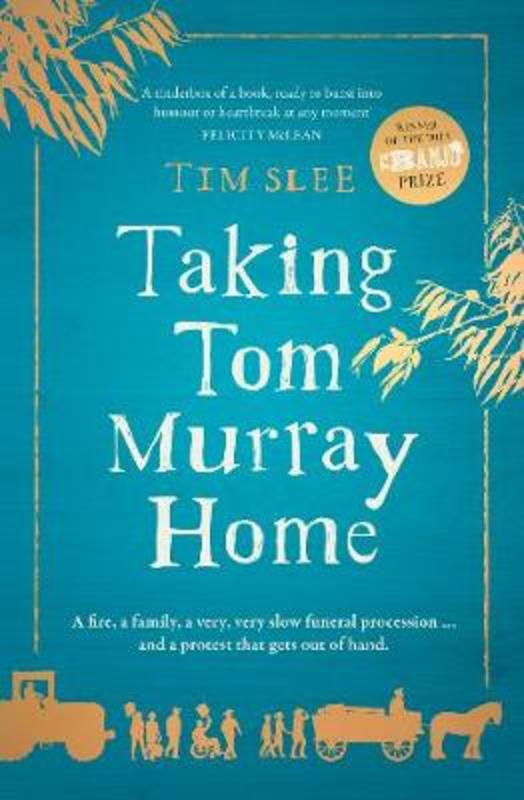 The winner of the inaugural Banjo Prize, Taking Tom Murray Home is a funny, moving, bittersweet Australian story of fires, families and the restorative power of community.

Bankrupt dairy farmer Tom Murray decides he'd rather sell off his herd and burn down his own house than hand them over to the bank. But something goes tragically wrong, and Tom dies in the blaze. His wife, Dawn, doesn't want him to have died for nothing and decides to hold a funeral procession for Tom as a protest, driving 350 kilometres from Yardley in country Victoria to bury him in Melbourne where he was born. To make a bigger impact she agrees with some neighbours to put his coffin on a horse and cart and take it slow - real slow.But on the night of their departure, someone burns down the local bank. And as the motley funeral procession passes through Victoria, there are more mysterious arson attacks. Dawn has five days to get to Melbourne. Five days, five more towns, and a state ready to explode in flames ...

Told with a laconic, deadpan wit, Taking Tom Murray Home is a timely, thought-provoking, heart-warming, quintessentially Australian story like no other. It's a novel about grief, pain, anger and loss, yes, but it's also about hope - and how community, friends and love trump pain and anger, every time.

'An absolute ripper of a story ...with a madcap cast of characters including farmers, hippies and lots of cops, with moments so funny I had to put the book down to laugh.' Adelaide Advertiser