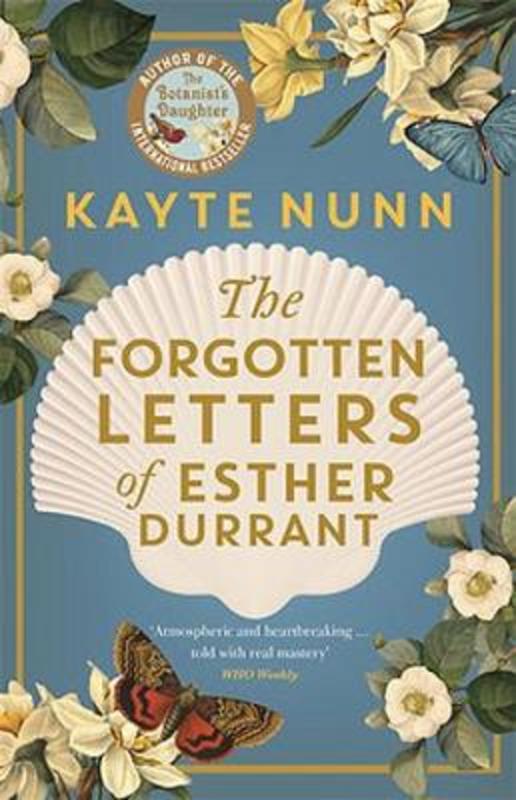 The Forgotten Letters of Esther Durrant

A cache of unsent love letters from the 1950s is found in a suitcase on a remote island in this mysterious love story by Top 10 bestselling author, Kayte Nunn

1951. In the shadow of the Second World War, Esther Durrant, a young mother, is committed to an isolated mental asylum by her husband. Run by a pioneering psychiatrist, the hospital is at first Esther's prison but soon becomes her refuge.

2018. Free-spirited marine scientist Rachel Parker embarks on a research posting in the Isles of Scilly, off the Cornish coast. When a violent storm forces her to take shelter on a far-flung island, she discovers a collection of hidden love letters. Captivated by their passion and tenderness, Rachel determines to track down the intended recipient.

Meanwhile, in London, Eve is helping her grandmother, a renowned mountaineer, write her memoirs. When she is contacted by Rachel, it sets in motion a chain of events that threatens to reveal secrets kept buried for more than sixty years.

The Forgotten Letters of Esther Durrant is a deeply atmospheric, resonant novel that charts the heart's wild places, choices and consequences. If you love Elizabeth Gilbert and Kate Morton you will devour this book.

'A sensitive, atmospheric and often heartbreaking story told with real mastery' WHO Weekly

'The characters are all vivid and interesting, and there's a dash of romance and a splash of intrigue. A really enjoyable read' KATE FORSYTH

Praise for the bestselling The Botanist's Daughter:

'Two incredibly likeable, headstrong heroines . . . watching them flourish is captivating. With these dynamic women at the helm, Kayte weaves a clever tale of plant treachery involving exotic and perilous encounters in Chile, plus lashings of gentle romance. Compelling storytelling' The Australian Women's Weekly

'I loved The Botanist's Daughter. I was transported to the 1880s and Chile, to contemporary Sydney and Kew. A gripping read' JOY RHOADES, author of The Woolgrower's Companion