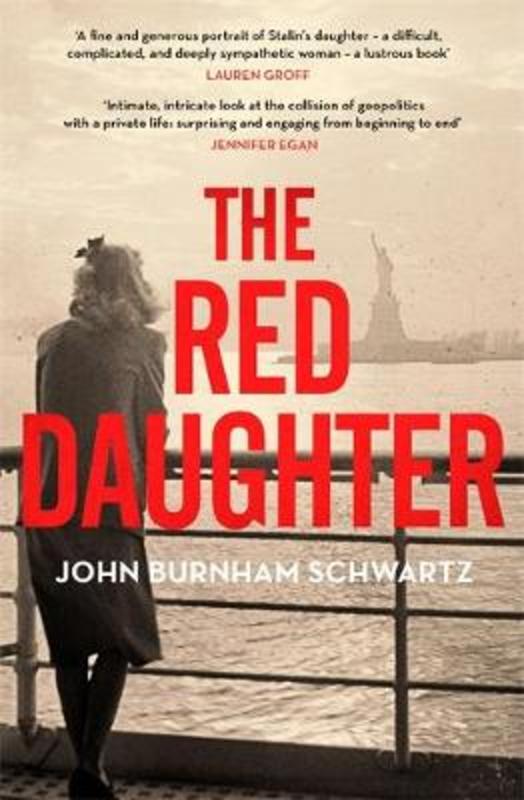 'THE RED DAUGHTER is an intimate, intricate look at the collision of geopolitics with a private life: surprising and engaging from beginning to end' - Jennifer Egan

'John Burnham Schwartz has drawn such a fine and generous portrait of Stalin's daughter - a difficult, complicated, and deeply sympathetic woman - that I read his novel in a single great draught, and ever since have been worried about Svetlana as though she were a close and troubled friend of mine. THE RED DAUGHTER is a lustrous book' - Lauren Groff

Running from her father's brutal legacy, Joseph Stalin's daughter defects to the United States during the turbulence of the 1960s. For fans of WE WERE THE LUCKY ONES and A GENTLEMAN IN MOSCOW, this sweeping historical novel and unexpected love story is inspired by the remarkable life of Svetlana Alliluyeva.

In one of the most momentous events of the Cold War, Svetlana Alliluyeva, the only daughter of the Soviet despot Joseph Stalin, abruptly abandoned her life in Moscow in 1967, arriving in New York to throngs of reporters and a nation hungry to hear her story. By her side is Peter Horvath, a young lawyer sent by the CIA to smuggle Svetlana into America.

She is a contradictory celebrity: charismatic and headstrong, lonely and haunted, excited and alienated by her adopted country's radically different society. Persuading herself that all she yearns for is a simple American life, she attempts to settle into a suburban existence in Princeton, New Jersey. But one day an invitation from the widow of the architect Frank Lloyd Wright arrives, and Svetlana impulsively joins her cultlike community at Taliesin West. When this dream ends in disillusionment, Svetlana reaches out to Peter, the one person who understands how the chains of her past still hold her prisoner. Their relationship changes and deepens, moving from America to England to the Soviet Union and back again, unfolding under the eyes of her CIA minders, and Svetlana's and Peter's private lives are no longer their own.

Novelist John Burnham Schwartz's father was in fact the young lawyer who escorted Svetlana Alliluyeva to the United States. Drawing upon private papers and years of extensive research, Schwartz imaginatively re-creates the story of an extraordinary, troubled woman's search for a new life and a place to belong, in the powerful, evocative prose that has made him an acclaimed author of literary and historical fiction.