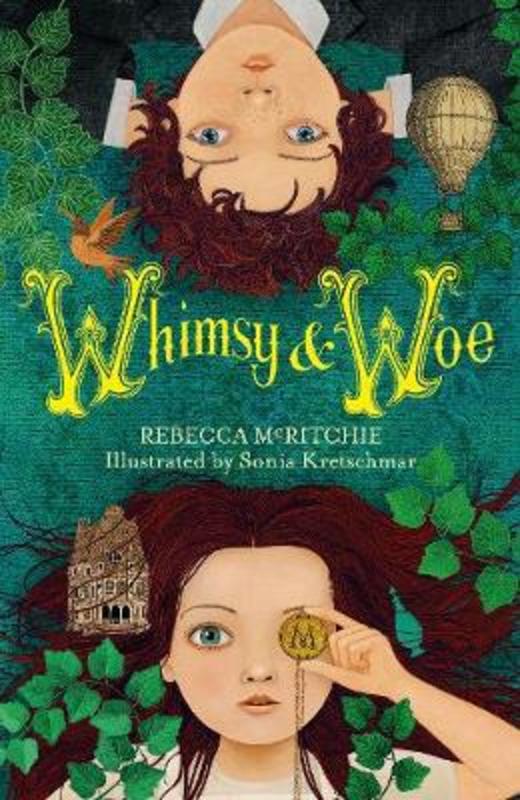 'ADVENTUROUS AND OUTLANDISH, WHIMSY AND WOE WILL HOOK KIDS IN FROM THE FIRST PAGE.'
- Books+Publishing, four stars

After being abandoned by their thespian parents, Whimsy and Woe Mordaunt are left in the care of their austere Aunt Apoline.

Forced to work in Apoline's boarding house, slaving at the beck and call of outlandish and demanding guests, and sharpening the thorns of every plant in the poisonous plant garden, Whimsy and Woe lose all hope that their parents will ever return. Until one day, quite by accident, the siblings stumble upon a half-charred letter that sets them on a course to freedom and finding their parents.

'Whimsy and Woe has it all: incredibly courageous children (hooray!), an evil calculating aunt, the ignominious Ignatius Solt (boo!) and a despicable one-legged pirate (hiss!), captivity and misery in a boarding house populated by an outlandish clientele (gasp!) and a heroic escape from a treacherous storm, imprisonment in a swamp and a wolf with razor-sharp teeth ... all told with vivid thespian style and flair.' - Readings

'Rebecca McRitchie knows what young readers want. McRitchie delivers a fun, energetic read in her debut children's fiction title; it is perfect for fans of Judith Rossell's Withering-by-Sea and Lemony Snicket's 'A Series of Unfortunate Events'. With non-stop plot twists, Whimsy and Woe has the ability to keep the attention of reluctant readers who will want to know what happens next.' - Books+Publishing, four stars

'Written in a style wonderfully akin to Lemony Snicket, the quaint language and eccentric characters will capture your imagination and keep you up reading late into the night.' - Goodreads review