Books to read that are anti-racist, and celebrate diverse voices 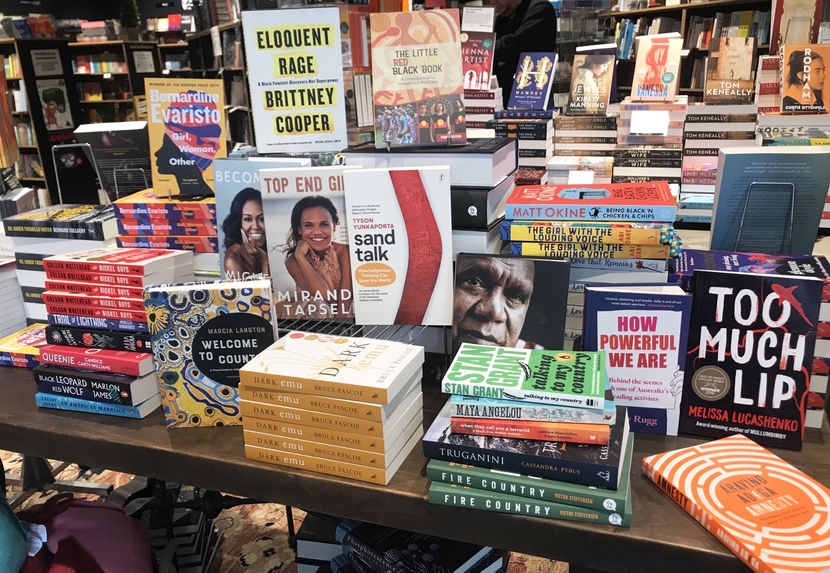 Like most, we have been saddened by the events unfolding in the US as well as right here in Australia, highlighting a legacy of inequity for Black and Indigenous communities that continues to this day. We thank our community for contacting us to request book recommendations for all age groups, that speak to this issue and offer a chance to educate, reflect and represent. We believe books are a crucial and meaningful way to connect, understand and elevate the experiences of black lives and voices.

We have put together some suggestions below, but this is by no means exhaustive. As always, feel free to chat to our booksellers in store if you are after something outside of this list. And, when you are in store please remember we have an ongoing charity drive for the Indigenous Literacy Foundation, which does critical work in lifting literacy levels so all Australian children have the same choices and opportunities. You can donate in store, or else directly via their website. 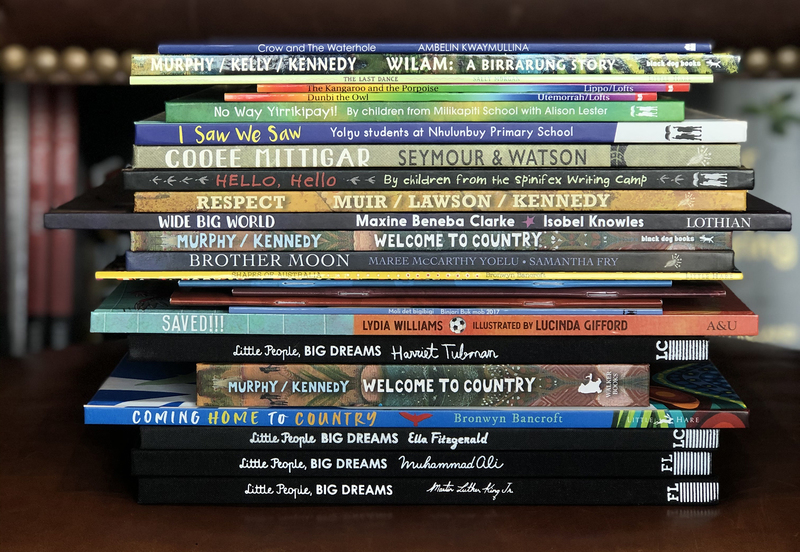 Crow and The Waterhole – Ambelin Kwaymullina
An uplifting story of the most beautiful bird.

The Last Dance – Sally Morgan
Everyone needs a home, but some Australian creatures are losing theirs.

The Kangaroo and the Porpoise & Dunbi the Owl
Based on Dreamtime stories told by Daisy Utemorrah and Agnes Lippo.

No Way Yirrikipayi! – Children of Milikapiti School with Alison Lester
Meet the animals and learn their Tiwi names in this delightful book for all ages.

I Saw We Saw – Yolgnu Students at Nhulunbuy Primary School
There's always something to see and do for these Yolgnu students.

Hello, Hello – Children from the Spinifex Writing Group
Join this family as they discover what the dark night is hiding.

Respect – Aunty Fay Muir, Sue Lawson, Lisa Kennedy
Reminds us to respect others and respect ourselves.

Wide Big World – Maxine Beneba Clarke
Celebrates difference in all its many and varied forms.

Shapes of Australia – Bronwyn Bancroft
From boulders to bee hives, from mountains to coral.

Coming Home to Country – Bronwyn Bancroft
A visual and lyrical depiction of coming home to country.

The Undefeated – Kwame Alexander and Kadir Nelson
A powerful and important ode to black history. 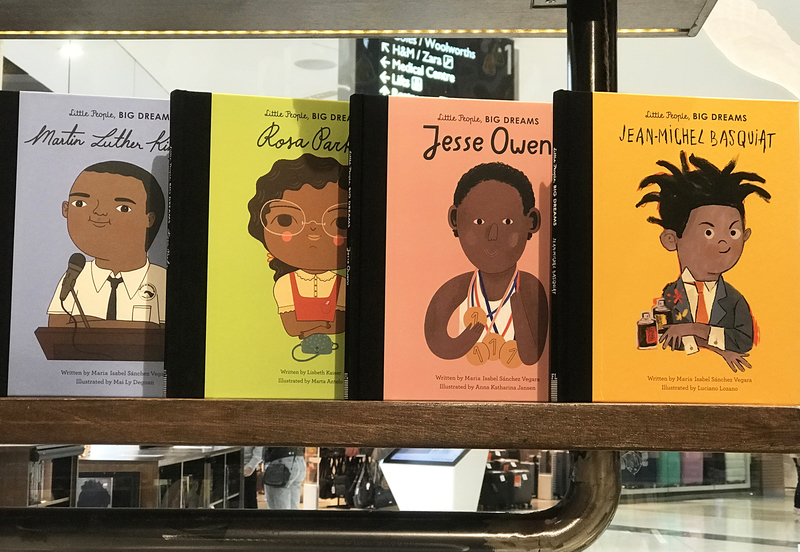 The Little People Big Dreams series is beloved for its depiction of important stories and people from history, to inspire the next generation of outstanding people. Using vibrant, gorgeous illustration and simple, truthful text, it communicates difficult issues and experiences in a way younger readers can connect with. Profiles include: 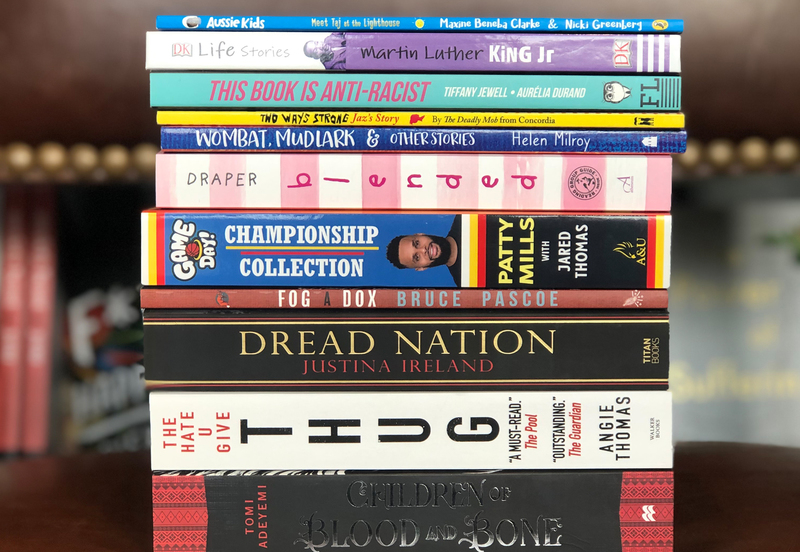 Blended – Sharon M. Draper
A story about divorce and racial identity told from the POV of an 11-year-old girl.

Fog a Dox – Bruce Pascoe
Albert is a bushman and lives a remote life surrounded by animals and birds.

I am Malala – Malala Yousafzai
Children's edition of Malala's story.

My Girragundji – Meme McDonald and Boori Monty Pryor
The vivid classic of a boy growing up between two worlds.

This Book is Anti-Racist – Tiffany Jewell, Aurelia Durand
Twenty lessons on how to wake up, take action, do the work.

Dread Nation – Justina Ireland
A story of the undead like you've never read before.

The Hate U Give – Angie Thomas
Inspired by the Black Lives Matter movement, this is about one girl's struggle for justice.

Children of Blood and Bone – Tomi Adeyemi
A fantasy YA touching on race, power and injustice.

Riding the Black Cockatoo – John Danalis
The inspiring true story of one man's reconciliation journey. (Ask us in-store about this title)

Refugee Boy – Benjamin Zephaniah
Based on true stories of young refugees. (Ask us in-store about this title) 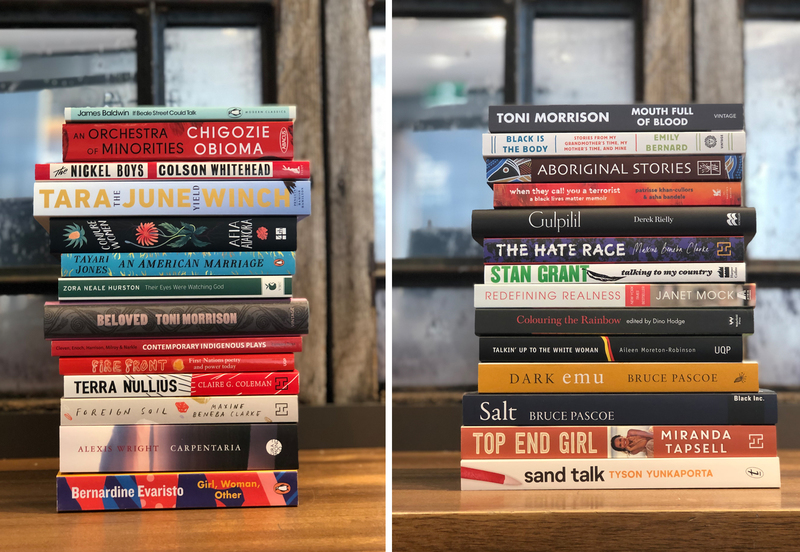 If Beale Street Could Talk – James Baldwin
A classic set in Harlem, the black soul of New York City.

An Orchestra of Minorities – Chigozie Obioma
Set across Nigeria and Cyprus, written in the mythic style of the Igbo tradition.

The Yield – Tara June Winch
The story of a people and a culture dispossessed, and a celebration of what endures.

Conjure Women – Afia Atakora
A pale-skinned, black-eyed baby arrives on the plantations like a bad omen.

An American Marriage – Tayari Jones
An explosive love story about a marriage interrupted by unfair imprisonment.

Their Eyes Were Watching God – Zora Neale Hurston
Described as the greatest American novel of the 20th century.

Beloved – Toni Morrison
The story of Sethe, haunted by the memories of her past.

Contemporary Indigenous Plays
Five plays from around the country.

When They Call a Terrorist – Patrisse Khan-Cullors, Asha Bandele
From the founders of the Black Lives Matter movement.

Talking to My Country – Stan Grant
A personal meditation on what it means to be Australian.

Redefining Realness – Janet Mock
A resounding and inspirational voice for the transgender community.

Talkin' Up to the White Woman – Aileen Moreton-Robinson
Indigenous women and feminism.

Salt – Bruce Pascoe
A collection of stories and essays.

Top End Girl – Miranda Tapsell
From young Larrakia Tiwi girl to star of the screen, this is Miranda's story.

Sand Talk – Tyson Yunkaporta
How Indigenous thinking can save the world.

Why I'm No Longer Talking to White People About Race – Reni Eddo Lodge
An essential handbook for understanding race relations in Britain and the world.

Tell Me Why – Archie Roach
A powerful memoir of a true Australian legend.

The Girl with the Louding Voice – Abi Dare
Fourteen-year-old Adunni wants an education.

Such a Fun Age – Kiley Reid
A searing study of race relations, class and the zeitgeist.

Welcome to Country – Marcia Langton
A curated guidebook to this land.

Finding the Heart of the Nation – Thomas Mayor
The journey of the Uluru Statement. 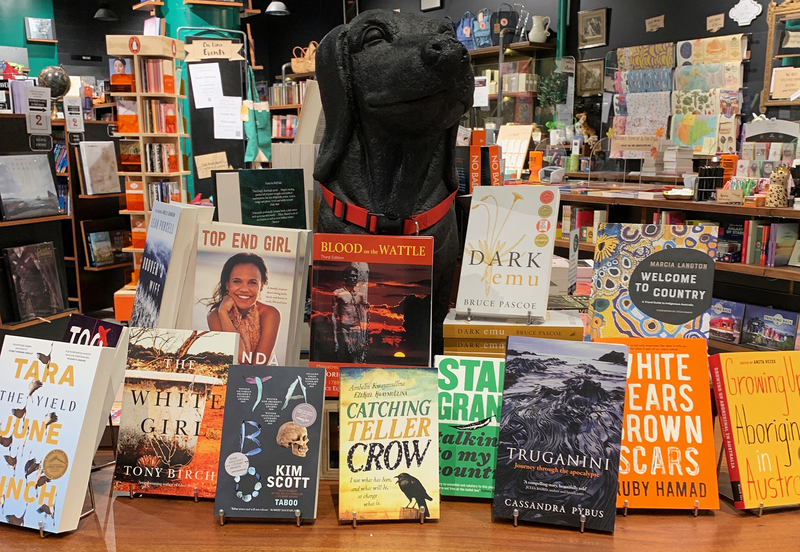